Following the line of the previous Posts, where the relation between thermal shock, Young module, were defined : http://goo.gl/2GNvnU (Relation Between Thermal Schock, Young Module and Crushing Strenght of Refractory Materials, 6th November 2012.

In this case, it has been made a study of the qualities in independent laboratories:

Testing its resistance to thermal shock to the water by EN 993-11:2007 and analysing the module vibration of Young variation during the cycles.

The module Young measuring is made through a non destructive essay that consist in evaluate through resonance frequencies its elastic module (Young Module), so that the same test body can continue making cycles of heating and cooling.

Following is exposed the variation of the Young Module in percentage so the number of cycles, where can be observed that the properties of the material after 30 cycles, are reduced a 37% in the worst case, being this quality R-COR-S60. In the case of R-COR-S-SUPER and R-COR-S-50 the fall off the Young module in 30 cycles is reduced only a 20% of its nominal value.

Fig. 2 Percentage of variation of the Young Module vs. the number of cycles

The test of the Young Module is done by: 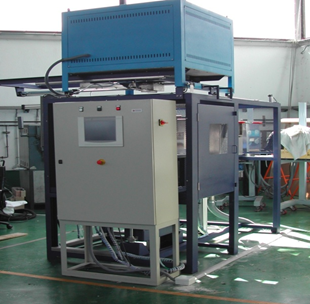 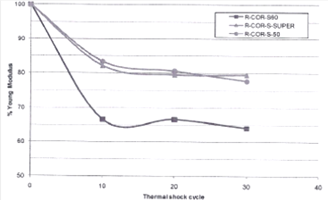