The Technical Department of TEIDE REFRACTORY SOLUTIONS S.L. continues to undertake trials in order to characterize their materials accurately and to give to our customers a specific solution for each situation.

In this matter has developed, (following previous post) the creep in compression according to the actual legislation as per UNE-EN 993-9 Norm, with the qualities R-COR-PI-FO and R-COR-PO-FO, as well as the refractoriness under constant load, as per EN-ISO 1893:2008, Norm.

The trial involves heating the sample evenly and applying a load constant equal to 0.2 N/mm2, thus analyzing the softening under load.

The type of graphics obtained from this test is the exposed in Fig. 2, where you can see that the test-bodies once exceeded a certain temperature, will soften and begin to deform due to the constant load applied.

Following it is shown the results of the refractoriness tests under constant load of the two studied qualities:

Fig. 3 Example of the creep in compression

Can we help you?_ 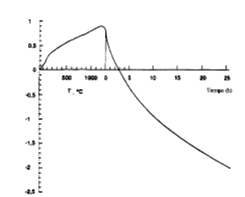